The Legend of Stingy Jack

Posted by Nick Schiltz on October 28

There's nothing spookier than unplanned downtime. Well, perhaps one thing, but will get to that old Irish legend later. But speaking of Ireland, Burnie & Les recently visited to provide some maintenance solutions. As always, they have two very different approaches to the same problem. In their offtime at The Temple Bar, Les continues to make his case for a proactive approach to electrical maintenance while Burnie makes a quick exit.

Welcome to the HUMPDAY blog; the official blog of Grace Technologies. Subscribe today by entering your information into the form on the right. Each week, we publish topics on electrical safety, predictive maintenance, and more. Welcome to the "more" side of the HUMPDAY blog where we take a look back at the history of Halloween and the legend that started it all.

I have often wondered where the origin of the Jack O'Lantern comes from so I did some research and came across this tall tale. This is The Legend of Stingy Jack:

Stingy Jack was a miserable, old drunk who loved playing tricks on anyone and everyone. One dark, Halloween night, Jack ran into the Devil himself in a local public house. Jack tricked the Devil by offering his soul in exchange for one last drink. The Devil quickly turned himself into a sixpence to pay the bartender, but Jack immediately snatched the coin and deposited it into his pocket, next to a silver cross that he was carrying. Thus, the Devil could not change himself back and Jack refused to allow the Devil to go free until the Devil had promised not to claim Jack's soul for ten years.

The Devil agreed, and ten years later Jack again came across the Devil while out walking on a country road. The Devil tried collecting what he was due, but Jack thinking quickly, said, "I'll go, but before I do, will you get me an apple from that tree?"

The Devil, thinking he had nothing to lose, jumped up into the tree to retrieve an apple. As soon as he did, Jack placed crosses all around the trunk of the tree, thus trapping the Devil once again. This time, Jack made the Devil promise that he would not take his soul when he finally died. Seeing no way around his predicament, the Devil grudgingly agreed.

When Stingy Jack eventually passed away several years later, he went to the Gates of Heaven, but was refused entrance because of his life of drinking and because he had been so tight-fisted and deceitful. So, Jack then went down to Hell to see the Devil and find out whether it were possible to gain entrance into the depths of Hell, but the Devil kept the promise that had been made to Jack years earlier, and would not let him enter.

"Back to where you came from!" replied the Devil.

The way back was windy and very dark. Stingy Jack pleaded with the Devil to at least provide him with a light to help find his way. The Devil, as a final gesture, tossed Jack an ember straight from the fires of Hell. Jack placed the ember in a hollowed-out turnip...one of Jack's favorite foods which he always carried around with him whenever he could steal one. From that day forward, Stingy Jack has been doomed to roam the earth without a resting place and with only his lit turnip to light the way in the darkness.

In Ireland and Scotland, people began to make their own versions of Jack’s lanterns by carving scary faces into turnips or potatoes and placing them into windows or near doors to frighten away Stingy Jack and other wandering evil spirits.

In England, large beets are used. Immigrants from these countries brought the Jack O’Lantern tradition with them when they came to the United States. They soon found that pumpkins, a fruit native to America, make perfect Jack O’Lanterns. 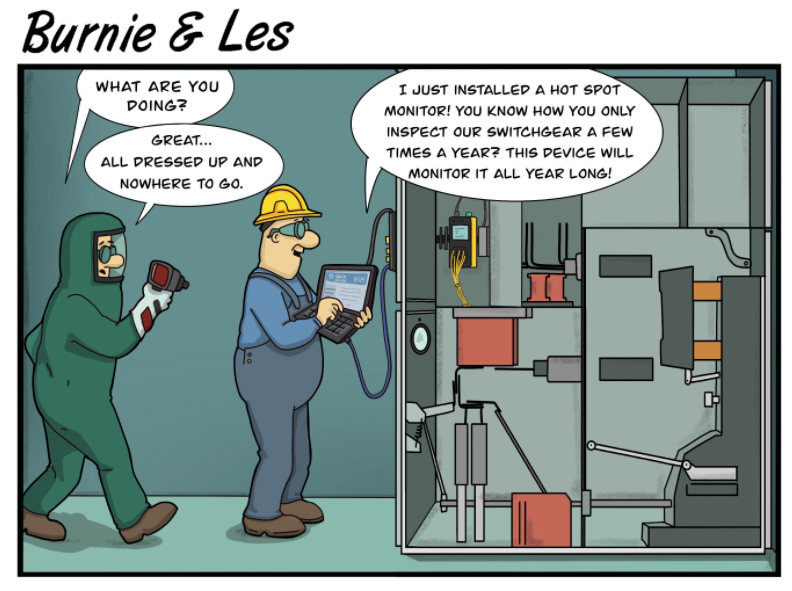 This year for Halloween, Burnie dressed up in his Personal Protective Equipment (PPE) suit while Les came to work as himself. This is because Halloween with the GraceSense Hot Spot Monitor is just like any other day; you have nothing to be afraid of.

The permanently installed temperature monitoring device will continuously monitor critical asset connections so you can avoid the hassle of periodic inspections. When anomalous and spooky behavior is detected, it will provide alerts via SMS or email to let you know attention is required.

No tricks! Just a treat: Learn more about enhancing safety and productivity with the insights of GraceSense predictive monitoring devices and how to reduce downtime in the process. You can download our FREE eBook by clicking below:

Stay SAFE and have a SPOOKY HALLOWEEN!