Posted by Nick Schiltz on December 23

The Allens received a bundle of joy this holiday season in the form of 8 pounds and 20 inches. Samuel Breese Allen came into the world at 8:04 pm on December 21. Drew is happy to report that "mom and Sam are healthy and labor went fast! Super blessed." Samuel is pictured here with his brand new grandparents. Congratulations, Drew, Ellie, Phil, Jane, & Eliane!

Samuel is named after Drew's great grandmother's great, great uncle, Samuel Finley Breese Morse. He is best known for co-developing Morse code. The inventors are strong in this family! Sam has a bright future with a wonderful, caring and loving family to light the way. 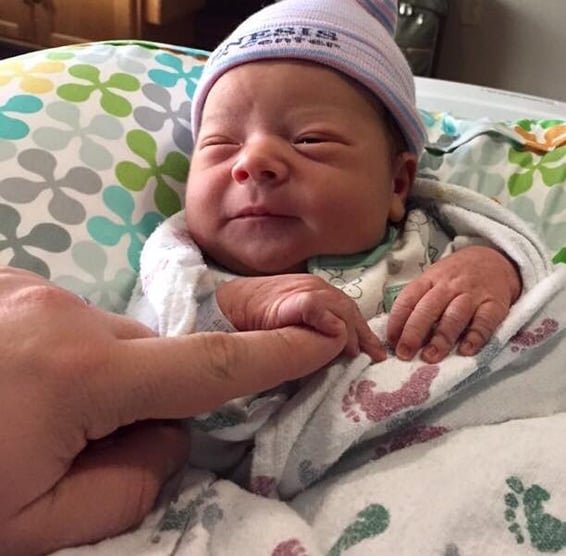 I, too, have a [in]famous relative of the same first name from the same generation! He was best known for performing surgery on the broken leg of a man fleeing the scene of Lincoln's assassination... On second thought, I probably won't name my first born after Samuel Alexander Mudd.

Meanwhile, I'm currently in Santa Fe, NM visiting my family for the holidays. While the Allens spent their Monday delivering a baby, I spent mine pulling cactus needles from my courageous companion, Bucky the Doberman. On our first hike, he ran through a cactus bush and we spent the next couple hours patching him up. Fortunately, he was not fleeing the scene of an assassination. Gave me quite a fright, but he was back on his feet at full speed in no time. We were thrilled to receive the baby Allen news after that near-traumatic event. I'm so excited to meet the little guy!

Samuel Breese Allen was born Dec. 21 @ 8:04 pm. He is named after the father of Morse code, who is of relation to the Allens. Better legacy than my distant relative... He was pardoned, though!

I hope you all have a wonderful Christmas this year! As I am away this week and next, I'll have to ask that you all depend on Santa for Giveaways. Back by popular demand, we're sending out bulk quantities of care packages through the Giveaway Survey again and we'll continue to do so through the new year. Many of you should have already received some of the Grace love this month, but I'll make it up to the rest of you next year!