Posted by Grace Marketing on October 14 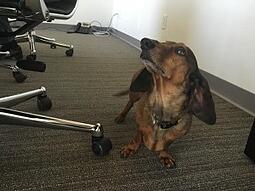 Last week, we put the spotlight on one of our office dogs, Kona. For those of you who asked what kind of dog he is, Kona is a Soft Coated Wheaten Terrier. But he wasn't the only one to blame for the security breach. The other three just happened to not be here that day: Hugo and Java, the Dachshunds, and Tori, the Pit/Shar Pei mix (also, the one that got away). They all have their own personalities and quirks, but one thing they do have in common is the potty fairy. The foursome has gotten very good at secretly going to the bathroom indoors on occasion. Of course, they are innocent until proven guilty, but I do know that Hugo's Napolean complex requires him to mark his territory.

One of the best things that have come from these dogs was from last week's trivia, inspired by their feats, where I asked you all, 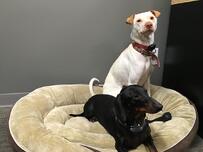 "Dogs, cats, or even children; what is something naughty that they have done, but funny at the same time?" Here are some of the responses I got and as much as I'd love to post more, there were just too many! I was laughing so hard, I most certainly deserved all the weird looks from everybody who passed by my desk.

Peety (my dog, a french mastiff) knocked himself out cold chasing a possum, he over-pursued and ran head first into a fence post, fell over and landed on top of the possum, which played...well...possum. He came to about 10 seconds later, got up, and walked sheepishly back to me where he sat down and sneezed for about 2 minutes. All the while, the possum is still laying there. About 30 minutes later the Possum got up and ran away.

I had a cat that would turn on the bathroom sink faucet and bat the water with her paw to determine if it was hot or cold. She would only drink the cold water.

Our dog chewed up the cell phone that was ringing in my coat pocket while the coat hung on the rack by the back door. He also got ahold of me wife's lip stick from her purse on the couch. It was not his color, though, so we cleaned him up.

My 9-pound Miniature Dachshund once raided a grocery bag on the floor before we had the chance to put them all away and completely consumed a 5-pound package of fresh-cut deli ham. That was more than half of her total body weight. Could you imagine eating half of your body weight? She was so stuffed that she could hardly walk and she looked miserable. I guess that it is true that Dachshunds have no self control and will eat themselves to death if given the opportunity.

I had a beagle that used to dig under the fence to escape. I finally ended up burying a series of boards a few inches underground just inside the fence line. She could not dig through wood and eventually took up fence climbing instead.

My almost 8 year old mischevious chocolate lab, Buckeye, LOVES THE TRASH. So much, he knows how to open the cabinet door I have hidden the canister behind. He then drags it into the living room, sometimes even ON the couch, and has at it. Never fails. If I remember to put the trash can on top of the counter, he still opens the cabinet door to check, failing to close it when he is done scoping out the hiding spot. He is also very good at letting other dogs out of locked cages, as he knows how to slide the latch over...and lifting up the latch on the gate in the yard. "Freedom!" is the first word that pops into his bad little brain.

Blaze, my Red Lab, is obsessed with water to the point where you cannot water any flowers outside without locking him in some room with no windows. He is happy to be full on sprayed in the face with a hose. One time at the dog park he found a mud puddle and rolled around in it like a pig in mud. Of course I had to video it. But we do not go to the dog park after it rains anymore.

Labradoodle - supposedly the best non-shedding, non-allergenic, most trainable guide dog - yeah, right, mine ain't from that doggy gene pool. If it's paper or cardboard, it must contain a food product is his way of doggie thinking, so that includes a box of staples, a light bulb socket in a box, any and all paper towels - which makes for interesting remnants in the yard, if you know what I mean? Guide dog? The only thing he can guide you to is food - period. Go for a walk, nope.

A good friend of mine has a black Lab, Max. Once, Max thought that the Christmas Tree was a fire hydrant.

Thank you to all those who shared, even those not mentioned. There were well over one hundred hilarious stories to sift through. We'll be sending out the dog and human treats soon! And finally for your viewing pleasure, I present to you a French Bulldog scaring off some Cubs (hey, that's more than the Cardinals could do):

tl;dr - We have four office dogs; a Soft Coated Wheaton Terrier, a Pit/Shar Pei mix, and two Dachshunds. Above are a sample of stories from readers that came from last week's HumpDay on dog shaming. I was LOL-ing reading them all. Coworkers are likely worried about me.

Thank you for reading and have a great week! 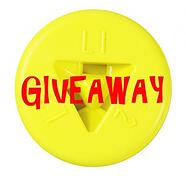