Posted by Nick Schiltz on September 7

Can anyone explain what's going on here? There is a downed line wreaking havoc on a playground and around the [1:30] mark the chain link fence gets lit as well. Comments on the video offer some insight but it's mostly speculation. Thankfully, nobody was harmed, but I can't think of a more terrifying place for this to happen than a kid's swing set.

Last week, we hosted a safety seminar that focused on developing effective electrical safety programs and how to avoid common errors. However, not everybody is as well prepared for the worst case scenario as those who work around energy everyday. The above video demonstrates the need for electrical safety awareness for all people in general.

When I was a kid, the extent of my electrical safety education was limited to not sticking my finger in the electrical wall socket. Also, I learned the hard way not to touch the fences at a horse stable. In the video, although they're mostly firemen and likely well-trained individuals for these situations, the bystanders are standing too close to the metal fence for my comfort. Let's see what some of the Internet's self-proclaimed professionals have to say about this video:

Firefighters don't turn off electricity on the power poles. The linemen do that. Source: I am a Firefighter. —Louisvillian50

Linemen don't turn off the electricity on the power poles. They're too busy protecting the quarterback. Source: I am ready for some football. —Smeeee

Lineman here—I just wanted to point out that it's extremely dangerous to stand anywhere near a downed line like that. The electricity leaving the line forms an area gradient as it leaves the source. Take one step (where one of your feet leaves the ground) inside said gradient and all of that white hot energy flows straight through your body, cooking you from the inside out. If you're ever caught in that type of situation, you need to do a slowly shuffle-step your way out. —NightmanCometh

In this case, keeping a bridle on the amps is what caused the sustained fault. It's apparent that, despite the fireworks, there is a relatively low fault current magnitude throughout the video. This is probably due to the swing set, fence, bush, etc, not being well bonded to ground. This resulted in a high impedance fault which the upstream protective element (fuse, recloser, or the like) didn't react to because of the low current. If the current was, in fact, unbridled, the fault would have likely only lasted a couple seconds, tops since the upstream device would have easily "seen" it- barring reclose shots of course. —Franchez1337

The scariest thing about electricity is that you can't see it until there's enough of it to rip a hole in the fabric of the universe.
—gamingchicken

As you can see from the usernames, these are obviously credible sources. Speaking of which, I know for a fact that I have some readers who are actual credible sources. What's your diagnoses on the swing set from hell? 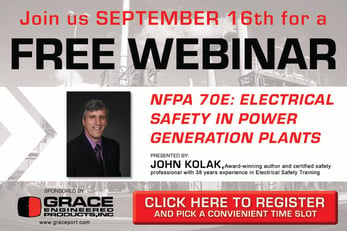 Enter to win Grace YETI prizes and other giveaways below...